Cliff de Bruijn is getting more out of life 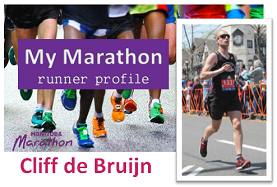 Edmonton runner Cliff de Bruijn has been running for just over seven years but has been playing competitive sports since childhood. As an adult, he was finding participating in team sports to be challenging: “I was kind of frustrated with playing team sports where the commitment from everyone wasn’t at the same level, as we would have multiple games where we played short-handed. So when a friend suggested joining a marathon clinic with them I decided to give it a shot”.  His decision paid off: Cliff has been running marathons since 2011 and this year he finished third in the Manitoba Liquor & Lotteries Full Marathon.

Cliff also uses running as a tool to reach other personal goals, like to travel more and explore the sights and trails in his province.  “Through running I have found more enjoyment in travel and not just travelling to other countries,” says de Bruijn, “There are many amazing trails to see in and around Edmonton, not to mention the Provincial Parks like Banff and Jasper. I spent multiple weekends this summer trying to see more of those trails. Plus, with running I  can potentially change a day hike into just a morning and not have to bring full camping gear”. Professionally, Cliff is an Associate Investment Advisor with TD Wealth.

What was the most personally challenging race you have ever run and why?

My first marathon was definitely the most challenging. That was Edmonton Marathon 2011 and I think it was probably because of all the uncertainty. I followed the program in the marathon clinic but having never done a marathon before you worry about everything. Will I have enough food? Should I bring extra water? Should I have done another long run? Should I have run 42km at least once as a training run? All those things are going through your head but once you have finished the race you have a baseline and every race after you feel (at least slightly) more prepared as you have done it before.

What is your favorite post-workout snack?

Chocolate Milk and a banana with peanut butter. It is tasty, simple and fast so it keeps me from starving while I look to make something a bit more substantial.

What is your number one method for injury prevention?

Rest. I have been fortunate that I have not suffered many injuries and none that were very serious. Mostly I have suffered from the occasional muscle imbalance when I have gotten lax on stretching and strength work. I usually treat the winter as recovery period where I don’t do as much and don’t worry about missing a workout if I’m not feeling well. Plus if anything hurts I take extra time to let it recover before starting my training again.

Following rest, I would definitely say adding some form of strength work to your program would be a huge benefit. A good friend, who is much more dedicated then I am, routinely points out the benefits from many different studies on how strength improves your overall running ability and I just keep trying to improve on this each year.

If you could travel back in time, what would you tell yourself when you first started running?

Mostly I wish I could have told myself to start sooner.  But I would say enjoy the training as much as you can. Some days it feels like a hassle to get through but if you can enjoy the training you are much more likely to stick with it. The good thing about running is you can make it what you want, you can train with a group or by yourself. You can run the same loop every day or try a different route, it’s entirely up to you and what you want to put in.

What goals have you set for yourself in the past year? How have you worked to achieve them?

I have started working towards completing the Abbott World Marathon Majors (Boston, Chicago, New York, Berlin, London and Tokyo).  I originally ran the Boston marathon in 2016 as that was a big goal in itself. But once Boston was done I heard more about the World Majors from a few friends and thought it would be a worthwhile challenge while also getting to see some amazing cities. In fact, I flew to Berlin to race in September and also received my notification at the end of August that I was accepted to run Tokyo in March of 2019.

I like to keep my race morning very calm and quiet. The night before I lay out my race gear and ensure my bib is pinned on to my shirt and that all the food, water and clothes I’m going to take are ready along with a bag for gear check. Depending on how I have to get to the start line I usually wake up two to three hours beforehand and have a very simple breakfast, usually something like cereal and a bagel. Then when I head to the race I generally eat some snacks along the way along with water. I make sure to stop eating about 30min prior to the race and head towards the start area. Anything I eat after that is usually gels or chews as it just carbs and doesn’t take much to digest.

What is your number one “get pumped up for a great run” song?

I don’t have any specific song that I listen to before a race but I do enjoy the music stations along the course. Anything familiar that is upbeat helps distract me from the race and can make the next couple kilometres go by much quicker.

Is there anyone that contributes to your training that you want to give a shout out to?

I want to thank the staff at Fast Trax Run & Ski Shop in Edmonton for all their encouragement and support over the last several years. As well as everyone that makes it out to the group runs for giving me something to strive for and giving me the guilt for the days I didn’t want to go for a run. I would also like to thank RunlAB for their support this past year, it has been a fun experience actually training on a track and doing speed work.