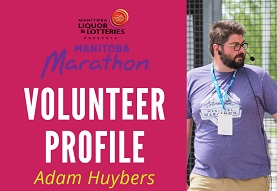 Adam Huybers was born and raised in the Manitoba Marathon. With his father Richard being a key volunteer and board member for over thirty years, Adam was raised following him and helping out and it remains a family affair to this day. Today, Adam has stepped up into the leadership role of supervising the east side of IG Field on race day. Professionally, Adam works in the HVAC industry at a company he co-owns with several others. Outside of his years of volunteering with the marathon, he has run several road races across Manitoba in a variety of distances. On top of all of this activity, Adam and his girlfriend Samantha are passionately involved with a variety of animal rescues and love spending a day at the park, beach, or on the hiking trails. Thank you Adam, for being such a big part of the Marathon’s past, present and future: we are so lucky to have you.

When did you first start volunteering with Manitoba Marathon? Can you talk a bit about your family’s history with the marathon and how you started working?

My Dad, Richard, has always been very involved with the Manitoba Marathon, both as a runner and as a volunteer. He has been on the board of directors of the Manitoba Marathon foundation and also served a term as Chairman. In our house, Father’s Day has always been synonymous with the Marathon. I know my dad was happiest when he could share the race with us. We would run around and help organize things at the equipment depot in the days leading up to the event, help him as we could when he volunteered, then get up early race morning and cheer on my dad as he ran. It was always something as a family that we looked forward to. My dad would run in other races during the year, but I always knew that the Manitoba Marathon was special. The event will forever be something that ties the Huybers family together. It is not just a road race event, it’s a time of year when we saw old friends, made new ones, and all came together.

What jobs have you done with the Marathon in the past? What do you do now?

My Dad eventually stepped back from running and began taking on a bigger volunteer role during race day. He eventually began organizing the VIP tent and we would come and visit him while he was ‘in his element’. Later, my younger sister Delaney starting heading up the newly created bicycle valet program as I began running in the Manitoba Marathon. I loved racing, completing two half-marathons and two full marathons. I wanted to give back to the race that I had so enjoyed and I began helping out my sister at the bike valet. I worked with her and her fantastic crew for three years enabling runners, volunteers and spectators the opportunity to ditch their car and cycle to the race. I had a great time working with those fantastic volunteers: even in the pouring rain everyone was smiling. In 2018, I was asked if I would like to take on a bigger role and act as coordinator for IG Field Concourse East. Initially, I was very nervous. I knew the race from a runner’s perspective, and my own little corner where I volunteered, but an event as large as the Manitoba Marathon has a ton of moving parts! As I attended the various meetings in the run-up to race 2018 I got to know all of the hardworking people who made it happen year after year and get a perspective of the big picture. Now my current role is to help set up the IG Field stadium in the days before race day, help out the volunteers on my side of the concourse however I can, and then tear it all down and pack it up for the next year.

You have a pretty important role on race day now, managing the action on race day. Do you feel the pressure when race week comes or do you go with the flow?

My current role has a lot of volunteers looking to me for a variety of things and can get a little hectic at times. However I am very lucky in that the volunteers that I work with are some of the most talented, hardworking and dedicated people I’ve ever had the privilege to work with. It can get a little crazy during stadium set up, but on race day it is nothing but fun. This year I fetched coffee, replaced lost food vouchers, ran athlete clothing, scrounged up extra Gatorade, and anything that all the fantastic people who make the Manitoba Marathon great needed.

What motivated you initially to take on this bigger role? What keeps you coming back?

For all the hard work (especially packing up the stadium, that Sunday afternoon can be challenging), I always come home happy and proud of the event I helped put on. I truly believe that the people who participate and volunteer at the event are some of the greatest out there. Everyone is different, from different backgrounds, with different perspectives, but everyone comes together in a way that is really special. I have nothing but respect for everyone involved with the Manitoba Marathon and I feel really lucky to count myself among them. The faces of the athletes as they finish range from laughing to grim determination, but they are all a sight I’m glad to see every year. The cheers of all the spectators who often brave cold rain or scorching sun to urge on friends, family and strangers alike always lift everyone’s spirits.

What kinds of overlaps do you see between your professional job and what you do at the Marathon? Do you feel like there are any transferable skills?

In my day to day, I’m often put in a position where you need to figure out a challenging situation, but it is important to not lose your cool. Working with the Manitoba Marathon has really helped me with that. When things look daunting, I’ve learned it’s important to just start doing what you can in the moment, put one foot in front of another and not get overwhelmed. Mistakes happen, but as long as you keep with it, you can accomplish it.

Do you have a race day memory that sticks out particularly in your mind?

My favourite race day memory is probably my sister’s worst! In 2013 I ran the full marathon, and I did so wearing a pair of Vibram Five Fingers (those weird toe shoes). I had a great race and loved participating in the Manitoba Marathon. However, like a lot of finishers can tell you, after the race is done, even regular activities can be a challenge. I had to take off my toe shoes, but I couldn’t bring my knees up high enough and I knew that if I sat down, it would be a little while before I could get back up. So I walked over to the bike valet where my sister was and asked her to help me. This was a task I wouldn’t wish upon my worst enemy, but I figured as a blood relation, she was obligated to help her brother in his time of need. Now keep in mind, these aren’t regular shoes that you just untie a knot and they slip off. You have to almost peel them off like a glove. She gritted her teeth, held her nose and removed the skin tight footware soaked in water, mud and a great deal of sweat. I thought the shoes smelled bad on my feet, but boy was it a whole other beast once they were off. Delaney handed them back to me before making a beeline to wash her hands with the strongest soap available. I felt fantastic being freed from those shoes and had a good laugh at my sister’s expense.

What advice would you give to a volunteer joining the Manitoba Marathon for the first time?

My advice to new volunteers is to enjoy the moment! It’s easy to think of this all as hard work, but on race day everyone does their absolute best, and it shows in this fantastic event. If at any point it gets overwhelming, look around and see all the happy faces of the athletes and the spectators. For those people, race day is the high point after months and months of training. Maybe it’s a first finish, a best time, or a yearly tradition. Whatever it is, it is so important to them and they know it’s thanks to all the volunteers who are there to make it possible. Never let hard work or bad weather get you down: you become a piece of an incredibly important day for thousands of people. I feel that at the Manitoba Marathon I’m proud to help out because of how much the event means to so many people.