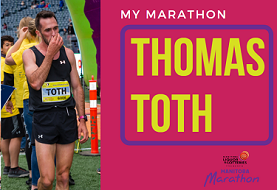 Thomas Toth was definitely a runner to watch at the Half Marathon Championships this year. He was coming in first at the Washington Rock and Roll Marathon in March after running a blazing 1:05:11. When he arrived in Winnipeg, he was only two months post-race from the Rotterdam Marathon where he came in 21st overall in 2:19:27. He definitely didn’t disappoint, with the amazing chase we saw on race day. With a strong record in both road and cross country races, Thomas is focused and tough and had some great info to share with us about race day and beyond.

The chase on Sunday was pretty tight – you finished a mere 42 seconds behind winner Tristan Woodfine and 27 seconds in front of third place winner Chris Balestrini. Does running an event with that tight of a field help fuel your race?
Yes, it’s a huge benefit! When I’m looking for races to fit into my schedule a few things are considered. Timing in relation to my main race of the season, timing in relation to my current fitness, competition, weather. A race is the best workout you can have due to competition. When I saw the start list I knew it was going to be a race in where the top 3-5 runners would have a chance to push the pace on both the men’s and women’s sides. Tristan and Belly definitely helped control the pace early and ensure that there was a fast race in Winnipeg.

You won the Canadian Half Marathon Championship in 2016 then haven’t been back to the event until this year. How did it feel returning to vie for the title again three years later?

Winning in Calgary was such a great feeling and I felt like I had validated a lot of hard work and sacrifice. It was only my second half of my career and I had recently missed out on the world half championships so I felt like I had something to prove. Since then I have missed out on nationals due to my marathon schedule. I’m usually still in Europe or just returning and still a little banged up. This year I was able to have eight weeks between my marathon and nationals. While not ideal and I wish I had a few more weeks of training it was enough for me to be competitive and help deepen an already great field.

What do you feel is the biggest difference between running the full and the half (physically or mentally)? Do you have a preference of one distance over the other?

The difference is fairly large. In Winnipeg I got by with only eight weeks of training and was able to perform reasonably well. While I wish I could have done better and had more time to train, I would never step up to a marathon on that little of notice. The marathon requires such a large base and long extensive workouts that it becomes a mental fight just as much as a physical fight every time out the door.

Fueling becomes a large factor in a marathon as you start to run low on glycogen. The weather plays a larger role since you’re in the elements for another hour and pacing becomes even more important. An early surge at mile 8 or 9 can cost you huge by mile  18 or 19 where as in a half you can muscle through for another 20 minutes.

I don’t know if I have a preferred distance as they both have such interesting aspects. I love the feeling of being able to really open it up in a half and run fast. The training is a little faster and can be more exciting at times. The marathon though I feel like I have a lot of potential that hasn’t been met, and that motivates me in a way I can’t explain.

What does your fall race schedule look like? What will you do in the next few months to get ready for it?

My schedule is never set in stone as I feel like sometimes things need to be added or dropped. Currently I’m looking to do Beach to Beacon 10k in Maine, Rock n Roll Philly Half in Philadelphia, then Toronto Scotia Bank Marathon at the end of October. If I feel I need to drop a race in favor of continuing my training block or add a race, then things can change.

You have a strong record in Cross Country events and are still active in that as well as road races. If you could choose to focus on just one would you do that or do you prefer the duality of being able to mix it up between the two?

That’s tough! I don’t think I could ever choose! But gun to head, probably cross country. I love facing the elements, the technical courses, the crowds, team element, and I don’t know if any race can be more unpredictable.  I think there is a large benefit to being able to cross over events. When I was growing up it was well known world cross had the best to offer in terms of athletes. Track, road, true distance, middle distance, everyone competed! I think that’s what makes cross country so interesting at the collegiate level. Whoever does well in cross generally has a good track season whereas track guys don’t always translate to the mud well.

If you could travel back in time to the start of your running career, what would you tell yourself?

I don’t know if I would say anything. Even though if I was ever faced with the situation in reality I would probably give my younger self an ear full from training to personal advice. I’ve been very happy with how things have turned out. My growth on and off the track have really made me happy. Do I wish I was a better athlete and a better man? Of course! But I do think I needed to live through some of those failures to really appreciate where I am at.